02 JanSnowmageddon. Is that what we’re calling it?

My mother in law's back yard & pool house

What has happened to our sense of community? Why are we all sticking our heads in the sand snow and pretending like this isn’t happening?

After reading extensively about this year’s higher-than-usual snowfall in Vancouver, not to mention working where the snow is really a necessary and enjoyable part of the equation, I’m convinced we need a refresher lesson on how to conduct ourselves to the betterment of our communities.

The following two links got me really thinking about our current weather situation:

Raul posted about the fact that Vancouver is just not prepared for a ‘climatic event’ such as this. True.

Burnaby Mayor Derrick Corrigan basically just said, ‘Get over it we’re not paying any more for snow removal.’

This year’s snowfall has made people in Vancouver angry; I’ve been a victim myself. I have felt a general sense of bitterness while out and about this holiday season and I am quite certain it has come from the snow.

We are all so busy being angry and self-absorbed, we’ve all stopped thinking about our communities. We’ve stopped being a part of our neighbourhoods and recognizing the greater good that can be achieved by each of us doing our part to help one another. We’ve fogotten how to be considerate.

Not only have we not been considerate, we’ve been down right rude at times. I’ve had people flip me the bird for simply suggesting they not park their cars in the middle of the road, and I’ve displayed some equally obnoxious behaviour of my own for minor infractions.

Now, I’m not an expert, but I spent a few years living in BC’s Thompson Okanagan region, so I’m very familiar with living in the snow. I think we can all do a much better job next time this happens by being better prepared and keeping our heads on straight.

Here are some tips for how to prepare and cope with snow:

Ensure your vehicle has at least good all-season tires.
While snow tires are favourable in the snow, we don’t always need them in Vancouver. We don’ t usually get the cold temperatures that would warrant snow tires. But good all-season tires are a must for even the smallest amount of snowfall on wet roads. Don’t wait until the snow starts falling; ensure you have good tires by mid-October at the latest. Vancouver has been known get a visit from Jack Frost before Halloween.

Ensure you own warm, waterproof boots.
They don’t have to look pretty. They don’t have to be trendy or cool. They just have to be warm and have a tread on them. If you can tuck your pants in to them, all the better. Trust me, I know this doesn’t win you any dates, but it really does serve a purpose. You don’t look all that cool with your pants soaked up to the knee because they’ve been dragging in the snow and you’ll have something to wear when you’re trudging through the snow to get your shovel. It’s also a good idea to buy one or two pairs of really warm (read: ski) socks, a toque, scarf and gloves. Just have them. It’s okay to keep and use the same ones for 20 years if they only come out once or twice a year. 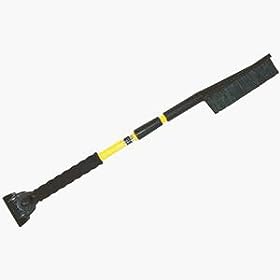 Keep a brush/scraper in your car.
I bought a long handled one from Wal-Mart for just $5 this year. It really does make it easier to clear the snow off your car (certainly easier than using a credit card). It also will make it comfortable enough so you can continue wiping snow off your vehicle until all the windows, roof AND headlights are clear. Please don’t forget that if your front bumper has more than 10cm of snow on it, your lights probably aren’t as visible to other drivers as they should be. Furthermore, if you don’t clear the snow off your roof, the car behind you may as well be driving in a snowstorm.

Move your car in to your carport or driveway.

Get your cars off the road as soon as the snow starts falling. This is impossible if you have more cars than spaces, but you really need to make an effort to clear the road of cars so that when the snow plows pass they are actually removing the snow from the roads and leaving the roads as wide as they were intended to be. We’ve all seen what happens when the snow plows can only push the snow as far as the outside of cars parked along the sides: roads become reduced to single lane alternating pathways.

Pick up a shovel and start sweating.

Skip the gym workout in favour of shoveling. Shoveling in the snow will provide enough exercise for anyone who wants it. Ensure you own a snow shovel and take the time to shovel your sidewalks, walkways and driveway. Most municipalities require you to shovel the sidewalk adjacent to your property by 10am each day. If you don’t shovel it, people risk their lives by walking in the road. Shovel the side walk morning AND night. None of us ‘has time’ to do this, but we need to make time. It’s imperative during snowfall; if you don’t keep up, you’ll never catch up. Shovel your driveway and your sidewalks and make sure you shovel the snow on to your own property instead of the road. Lastly, try not to get angry when the plows push snow back on to your freshly shoveled sidewalk. That’s just part of the game.

Help out your neighbours.

The shoveling I was just talking about… yeah, your neighbour needs his property shoveled too. While you’re out there, lend a hand if you can. I know we’re all running late all the time, so taking time to help someone out isn’t something we have a natural tendency towards doing. At the same time we’ll all be in less of a hurry when someone dies because they were over 80 and trying to do the shoveling themselves and no one offered to help. Some people, particularly the elderly, don’t drive and thus rely on sidewalks to get around safely. Many are ultimately trapped in their homes without adequate snow removal.

Allow ample time to get where you’re going.

I’m certain most accidents could be avoided if everyone would just slow down. Give yourself more time to get where you’re going and don’t expect you can carry on with your life at the hectic pace you’re used to. You need to allocate more time in the snow. If the person in front of you wants to drive more slowly than you do, give them that without pressuring them to go faster than they’re comfortable. Driving a lifted 4×4 is not an excuse to be a jerk on the road. Just because you can still go the speed limit doesn’t mean everyone else can, nor does it mean they should pull over.

Be cautious on the roads.

Whether you’re driving or walking, be extra careful to obey the rules of the road. Do not jay walk. Drivers can’t tell for certain whether they’ll be able to stop when they expect to, let alone when they don’t expect it. Don’t step out even if you have the right of way until you know for sure the approaching vehicle can stop. As a driver, stay in your own lane. Snow is no excuse to erase the lines on the road. Just because you can’t see them, doesn’t mean you should assume they aren’t there. Don’t cut the corners; just go slower.

Take up a winter sport.

Enjoy the snow! There’s no reason to make it a dreary affair. If you have kids, take them sledding. If you don’t, take up a snow sport like cross country skiing, downhill skiing, snowboarding or snowshoeing. There are so many wonderful ways to enjoy the great outdoors in the snow, it’s a shame to spend the winter cooped up inside yearning for the days of warm sand and sailboats. Besides, participation in winter sport can have a positive effect on your mood and overall health. It’s just good for you.

Whether next year or ten years from now, maybe we’ll be better prepared next time. Or maybe we’ll just reach out and help one another and consider how our decisions and actions affect others when we’re faced with unusual snowfall.

What do you think? How else can we so a better job of this?